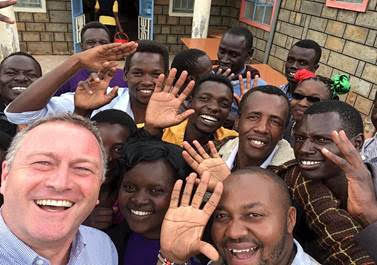 “I spent part of the summer doing voluntary work in Kenya. The international development charity VSO invited me to volunteer with campaign groups who want their government to pass new laws to strengthen democracy in the country.

Kenya became a multi-party democracy in 2002, and agreed a new constitution in 2010 to end political unrest. The new constitution enshrines a right to public participation in decisions taken by Parliament, but Kenyans know that communities need a stronger voice to make this meaningful.

I met an inspirational group of deaf Kenyans campaigning for improved disability rights in the Nandi Hills of rural western Kenya, and a group of Kenyan women campaigning for gender equality. They’re part of a burgeoning civil society movement across Kenya demanding a better life for people, and seeking ways to engage their young democracy to achieve it.

Kenya’s political system is very deferential compared to the UK system. A traditionally patriarchal society and the oppressive legacy of colonialism followed by an extended period of single-party rule will take some time to fully overcome. Building the capacity of communities to participate and act is a key objective of projects like the UK-funded International Citizens Service. The energy and enthusiasm of a group of young Kenyan and British ICS volunteers I met in Nandi was striking. They’d clearly learnt from the local community as much as they’d been able to offer.

Back in Nairobi, Kenya’s capital, we took the same message to national politicians. We won support from representatives in Parliament, the Senate and the Deputy President’s Office for legislation to give communities a bigger voice in decision making. The UN representative who joined us believes this legislation could set a precedent for other emerging democracies.

I gave a lecture at a university in Nairobi then discussed with charities, campaign groups and NGOs how people can have a bigger voice in decision-making. My experience in the UK shows me that voice is only the first step, because without power to back it up, a voice can be ignored.

One of the big lessons of international development work is that instead of trying to do everything for communities, it’s better to build their capacity to do things for themselves. There’s a real opportunity for Kenyans to shape a democracy that recognises that politics only works if it’s built from the bottom up, and that democracy isn’t just about persuading those in power to listen, but about making sure communities have the power they need to lead change on their own terms.

I’ve agreed to mentor a young disabled leader in Kenya who’s studying disability empowerment, and I’ve also agreed to work with a group of international charities to set up a global network of politicians working on empowerment. We can learn a lot in the UK from innovative initiatives happening in countries like Kenya, and it was a real privilege for me to work with such wonderful and inspirational people over the summer.”